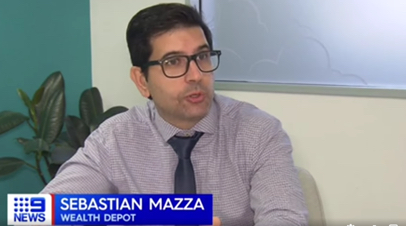 Wealth Depot was very proud to have been a part of the 9 News feature on the issue of women retiring with less super than men.

Check out Sebastian from 1 minute 10!

There’s a fresh push to make sure Queensland women have more money to enjoy retirement. Right now, the gender gap is leaving far too many people struggling in their golden years. The figures are shocking. The average Queensland woman is retiring with around $55,000, less in her super account than a man. An industry super funds study reveals the gender gap for Queensland women peaks between the ages of 45 to 54, where the average superannuation balance is up to 37% less than men of the same age. “Now let’s put in place policies that are going to close the gap.” Industry Super funds is calling on the government to raise compulsory, super contributions to 12%.

The superannuation minister says it’s not that simple. “The superannuation industry has always wanted more and more money in the superannuation system because that’s where they earn their fees. In fact, the best way to close the gender pay gap is to bring more women into the workforce in better and higher-paying jobs.” Interestingly, this study also found both Queensland men and women are retiring with super balances well below the national average and the amount recommended for a comfortable retirement. To stop that from happening finance experts recommend taking action now.

“First thing is to check that their super is being paid by the employer and to consider making voluntary contributions, and also then checking how their super is performing.”

You can see how your balance compares and how your fund is performing at smartmoney.gov.au.