Life Insurance Through Superannuation for Under-25s

The Federal Government announced in its 2018/19 May Budget that on 1 July 2019, superannuation funds will be mandated to remove life insurance for members under the age of 25 and for those whose account balances are under $6,000.

Only a few weeks later, the Superannuation Productivity Commission supported the measure in its draft report.

Some experts endorse the move, saying it is unfair to expect under-25s, who commonly are on lower incomes, to subsidise the older generations who are at greater health risks. They add that under-25s’ lack of engagement means their insurance premiums are more likely to erode their accounts, and life insurance products in superannuation may not be tailored appropriately to them.

However, other experts say the opt-out model is valuable for under-25s because it ensures they will have a basic level of cover that they otherwise may not obtain for themselves. They say this may greatly assist them and their families, while simultaneously reducing the taxpayer burden. They add this model also prevents premiums increasing for other members and consequently keeps the average level of account erosion down.

The Productivity Commission reported that most MySuper accounts had life insurance and total and permanent disability (TPD) cover, but only 29% of MySuper, and only 9% of non-MySuper accounts included income protection (IP) cover. IP is the cover most likely to be of use to young people. According to 2013–14 data from the Australian Institute of Health and Welfare, there were more than 80,000 hospitalisations of young people because of injury and poisoning alone (Figure 1).

We advocate for life insurance to be considered for all age groups to ensure an appropriate financial risk protection strategy is in place to provide vital financial support due to unforeseen circumstances, which affect the ability to earn income or support dependents.

One important implication of the proposed changes will be that younger members of our society will have reduced financial support. This is a concern with most younger members not engaged with their superannuation.

In addition, by removing automatic cover, the Government may find itself having to increase its provisions of disability support pension and NDIS (National Disability Insurance Scheme) funding.

We continue to encourage younger members of society to be engaged with their superannuation accounts with the support of parents and guardians, so that younger members can consider their options and achieve better outcomes. 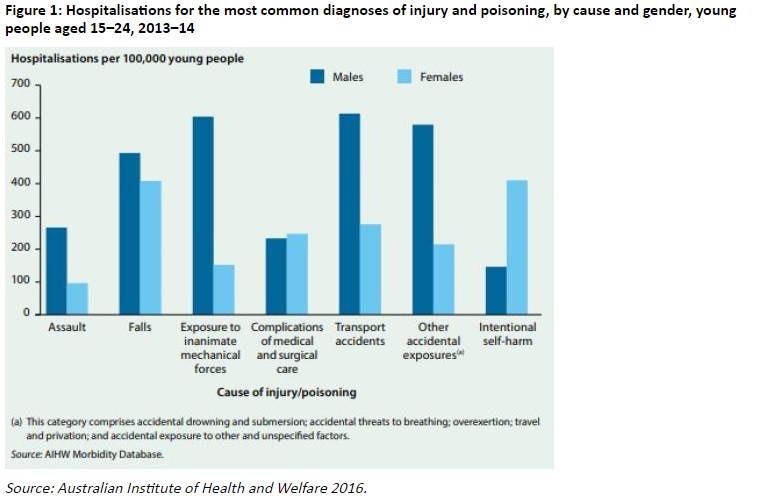 Get your estate plan spot on
December 4, 2019
Taking time to prepare for your financial future
October 31, 2019