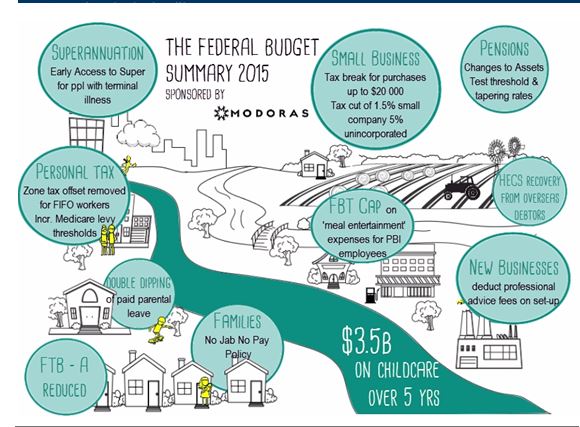 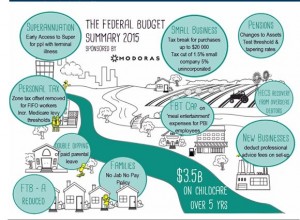 The Government has recently announced the Federal Budget for 2015/2016 with a focus on “fairness and family”. Treasurer Joe Hockey has encouraged Australians to “get out there and have a go”, recharging labourers and entrepreneurs to strengthen the economy and assist in restoring Australia to a sustainable fiscal position.

Despite the iron ore price nearly halving and $52 billion in tax receipts write downs to 2017/2018 since the last Budget, the Government continues to progress budget repair in a way that is claimed to be “responsible, measured and fair”. The Government is predicting a Budget deficit of $35.1 billion in 2015/2016 (2.1% of GDP) with no surplus predicted in the Government’s medium term projections but with the Budget deficit reduced to $6.9 billion by 2018/2019.

The Federal Budget has outlined targeted changes towards the nation’s savings and expenditure that may have an impact on you and your family. We have summarised these points below, noting that these are subject to the passing of legislation and should be discussed with your Financial Planner.

The Government will also deliver a tax cut to all small businesses through a 1.5 percentage point tax cut for small companies and a five per cent tax discount on income from unincorporated small business activity. Eligible small businesses will also be able to change legal structure without attracting a capital gains tax (CGT) liability at that point. CGT roll-over relief is currently available for individuals who incorporate but all other entity type changes have the potential to trigger a CGT liability.

Small Business Start-Up
For small business start-ups, business registration will be streamlined, with one website acting as a one-shop stop for setting up a small business.

The Government will also allow small businesses to deduct a range of professional expenses associated with starting a new business, such as professional, legal and accounting advice.

Superannuation
The 2015/2016 Federal Budget remained largely quiet on superannuation, however there were minor budget measures regarding unclaimed superannuation and conditions of release for terminal illnesses.

Terminal Medical Decision
From 1 July 2015, the Government will extend access to superannuation for people with a terminal medical condition from 12 months to 24 months.

Centrelink, Dept. of Veteran Affairs and Families
Low Income Support
The Government has announced that it will cease the Low Income Supplement from 2017, currently helping low-income families with an annual payment of $300 to assist with household costs.

Defined Benefit Income – caps to social security testing
From 1 January 2016, the Government has announced that it will introduce measures to cap the proportion of Defined Benefit income that can be excluded from any income test at 10%. Under current arrangements, some defined benefit superannuants are able to have in excess of 50% of their superannuation income excluded from the pension income test.

The Government has also announced that it will not proceed with the 2014-15 Budget measure to index the Pension by the Consumer Rate Index. Instead, the Pension will continue to be indexed under the current arrangements, that being the average male weekly earnings.

The Government will ensure that all primary carers have access to parental leave payments that are at least equal to the maximum PLP benefit (currently 18 weeks at the national minimum wage).

Family Tax Benefit (FTB) Part A – Reduced Portability
The Government has elected to reduce the amount of time FTB Part A will be paid to recipients who are outside Australia. From 1 January 2016, families will only be able to receive FTB Part A for six weeks in a 12 month period while they are overseas. Currently, FTB Part A recipients who are overseas are able to receive their usual rate of payment for six weeks and then the base rate for a further 50 weeks.

Families Package – Childcare
Over the next 5 years, the Government will provide additional funding to support families in obtaining flexible, accessible and affordable child care so that they can move into or return to work, stay in work, train, study or undertake other recognised activities.

The existing CCB, CCR and Jobs, Education and Training Child Care Fee Assistance Programme will continue until the start of the CCS in 2017. The Department of Human Services will contact families directly and provide information on current entitlements and how they may change under new arrangements.

Nannies Trial Scheme
From 1 January 2016, a new Interim Home Based Carer Subsidy Programme will subsidise care provided by a nanny (within the family home). This pilot programme will extend the current fee assistance to the parents of approximately 10,000 children. Families selected to participate will be those who are having difficulty accessing child care with sufficient flexibility.

Youth Payment Testing Arrangements
Over the next 5 years, the Government has elected to amend parental income testing arrangements to provide more support for families with dependent young people who qualify for certain income support payments, including Youth Allowance, ABSTUDY Living allowance (ABSTUDY), and the Assistance for Isolated Children Scheme.

Higher Education Loan Help (HELP)
From 2016-17, HELP debtors residing overseas for six months or more will be required to make repayments of their HELP debt if their worldwide income exceeds the minimum repayment threshold at the same repayment rates as debtors in Australia.

Home Care Program
The Government will provide $73.7 million over four years to increase consumer choice and flexibility for older Australians in receipt of a Commonwealth funded Home Care Package.

This measure includes $19.9 million over two years in capital funding to enhance the My Aged Care Gateway functionality to manage the allocation of Home Care Packages to consumers.

This measure will result in an overall increase in the number of short term restorative aged care places to support older Australians regain mobility and confidence to live safely at home after a period of hospitalisation and reduce the number of premature admissions into permanent residential care.

Work-related car expenses
The Government will modernise the methods of calculating work-related car expense deductions from the 2015-16 income year. The ’12 per cent of original value method’ and the ‘one-third of actual expenses method’ will be removed. The ‘cents per kilometre method’, will be modernised by replacing the three current rates based on engine size with one rate set at 66 cents per kilometre to apply for all motor vehicles, with the Commissioner of Taxation responsible for updating the rate in following years. The ‘logbook method’ of calculating expenses will be retained. These changes will not affect leasing and salary sacrifice arrangements.

Zone Tax Offset
The Zone Tax Offset applies to individuals in recognition of the isolation, uncongenial climate and high cost of living associated with living in identified locations.

From July 1 2015, the Government will now exclude ‘fly-in fly-out’ and ‘drive-in drive-out’ (FIFO) workers from the Zone Tax Offset where their normal residence is not within a ‘zone’.

Changes to residency tax rules for temporary holiday workers
The Government will change the tax residency rules from 1 July 2016 to treat most people who are temporarily in Australia for a working holiday as non-residents for tax purposes, regardless of how long they are in Australia. This means they will be taxed at 32.5% from their first dollar of income up to $80,000.

Cap for not-for-profit salary sacrificed benefits
The Government will cap the amount employees of public benevolent institutions and health promotion charities can salary sacrifice for meal entertainment benefits to a separate single grossed up amount of $5,000. All use of meal entertainment benefits will become reportable and this measure will apply prospectively from 1 April 2016.

Other
Unclaimed Monies Provisions
From December 31 2015, the Government will improve the way unclaimed money in savings accounts and life insurance policies are managed.

The Government will also make changes to enable genuine inactive accounts to be transferred to ASIC to address concerns around identity theft and to stop unscrupulous people preying on vulnerable Australians.

The Government will also allow primary producers to depreciate over three years all capital expenditure on fodder storage assets such as silos and tanks used to store grain and other animal feed.

National Security
With home-grown terrorism a major concern for the Government, the Budget sets aside $450 million to boost national security by giving various intelligence agencies more resources. This includes boosting the technological capabilities of the countries intelligence-gathering agencies and providing additional training to border protection officers.

Foreign Investment
Tougher enforcement and penalties for foreign investment law breaches, especially related to real estate, as well as significant new application fees will assist the Government in raising revenue in excess of $651 million over the next four years.

Commonwealth Penalty Units & SMSF Administration Penalties
The Government will increase the value of all Commonwealth penalty units (the amount payable for fines under Commonwealth Laws) from $170 to $180, with effect from 31 July 2015. This will mean increases in all existing penalties under the SMSF administrative penalty regime.

Multinational Tax avoidance
The Government will introduce a new targeted anti-avoidance law in the Income Tax Assessment Act 1936 aimed at multinationals that artificially avoid having taxable presence in Australia earning a global revenue of $1 billion or more.

The Government also expects to collect $350 million from the “Netflix Tax”, which applies GST to foreign businesses selling digital products, such as downloaded movies, games, and e-books.

More information
If you would like to discuss with us further how this budget may impact you specifically, please contact our office 07 3421 0100 or email info@wealthdepot.com.au